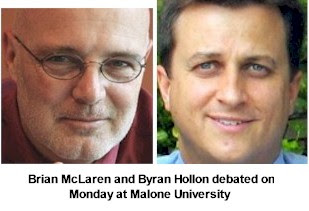 Last Monday at Malone University, the community of Canton, Ohio came out to see the slugfest that never was. Many were hoping that Bryan Hollon, a theology professor at Malone, would take Brian McLaren down to the mat by showing the apostasy of McLaren in all its WWE Rawness.

It was not to be. The debate between the two was gracious and kind. the crowd that came to nail McLaren as a heretic no doubt left disappointed.

Bryan Hollon did, however, step up to the microphone and offer a very insightful statement on how he thinks Brian McLaren and the Emerging Church are in danger of “going off the rails.”

First, Hollon said that McLaren misunderstands the nature of the Christian message as it pertains to history. Hollon is troubled by how McLaren states that the Christian church throughout the history has seen doctrinal development and change. McLaren encourages his readers to continue the necessary progression of doctrine in our day. Hollon counters this by stating that there is a core dogma—a central teaching—that has always been there, has not changed, and has been passed along through the church. This is what we affirm in the Nicene Creed when we say, “I believe one holy catholic and apostolic Church.” The “Church” is “apostolic” because we hold to those core teachings handed down to us from the Apostles of Christ.

Hollon’s second point of contention with McLaren is that McLaren makes too radical a break between modern and postmodern Christianity. Hollon thinks that McLaren caricatures modern Christianity and then “tars and feathers it.” How does McLaren do this? By painting the difference between the modern age and postmodern age in too black-and-white contrasts—Modern Christianity was strictly concerned with rational epistemology, individuality, and “Evidence that Demands a Verdict” while Postmodern Christianity (in McLaren’s words from his book, Generous Orthodoxy) does not claim “to have the truth captured, stuffed, and mounted on the wall.” Hollon refutes this caricature by stating that the Christian church has always seen the “Rule of Faith” to be the route to the “Rule of Prayer,” that sound doctrine is a prerequisite for sound practice. He took the time to read the Hymn “Joy to the World” as evidence that the music of Modern Church took “truth” but then allowed that truth to inform her worship.

The third criticism Hollon offered is that he believes that McLaren has an insufficient understanding of Dogma. Contrary to what Hollon sees in McLaren’s writings, Hollon stated that Dogma is not something to be condemned, but that it helps us to understand Scripture correctly. The “Rule of Faith,” as stated in the Creeds of the church, are the core of our beliefs. These do not change. Hollon thinks that the emerging church and Brian McLaren would benefit from making a clear distinction between “Dogma,” “Doctrine,” and “Opinion.” “Dogma” is the central teachings of the Christian faith – the unchanging truths stated in the Apostle’s Creed and Nicene Creed and the first four ecumenical councils. “Doctrine” is a second order set of teachings, created by different Christian communities as they understand Scriptures in the milieu of their traditions, and “Opinions” are the theological discussions and debates among people that go beyond that. What Hollon thinks McLaren does is conflate these in a way that says that since “doctrines” and “opinions” change over time, “Dogma” does as well. McLaren and others in the Emerging Church conversation also mistakenly believe that if a Dogma is unchanging, this squelches theological discovery. Hollon stated that this is absolutely the opposite of what is the case: Dogma does not exhaust the doctrines of God, they are merely “the kindling for further exploration of God.”

Next: McLaren’s Rebuttal of Hollon’s Statement, the Debate, and then the Inquisition Begins

other posts in this series:
The Inquisition of Brian McLaren?
Brian McLaren: Six Stages of the Emerging Church Conversation
McLaren at Malone: My Musings on the Mêlée
Posted by Bob Robinson at 4/02/2009

If think Hollon's position is solid and if he's not erected his own straw man upon McLaren's position, then McLaren has some answering to do.

Looking forward to the continuation...

Interesting distinctions made here. I appreciate that.