Tim Keller's The Reason for God 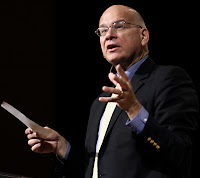 It was a very insightful presentation and Q & A time, based on Keller's new book, The Reason for God: Belief in an Age of Skepticism.

For those who are looking for excellent things to listen to on the mp3 players, click on the "Download" links to listen to these sermons related to this book from Tim Keller's sermon series "The Trouble with Christianity: Why it's so Hard to Believe it."
Posted by Bob Robinson at 5/31/2008 No comments:

Are Politicians Failing Our Lobbyists?

Panelists discuss the alarming trend of politicians who break their promises to the lobbyists who helped elect them.

Pray for our Military Chaplains 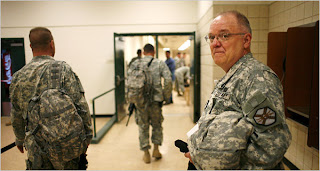 Chaplain Richard Brunk watching as soldiers enter a briefing at
Fort Hood, Tex., before they are sent to the Persian Gulf.

Just as it has claimed so many other members of the military, the war in Iraq has taken a toll on chaplains. Although they do not engage in combat, chaplains face the perils of war as they move around Iraq to visit troops. None have been killed, but some, like Chaplain Brunk, have been wounded. Many report post-traumatic stress disorder and other stress problems.

In the past year, the Army has begun to recognize those problems among chaplains and is ensuring that those suffering from stress disorders receive medical treatment at military hospitals.

The Army’s chief of chaplains, Maj. Gen. Douglas L. Carver, has mandated that every military installation offer programs to ensure the mental well being of its chaplains. A spiritual center will open this summer at the chaplain training headquarters at Fort Jackson, S.C., and chaplains will be invited to retreats.

Watch this video on how the technological revolution is changing our lives and how it must also change our whole paradigm about education. 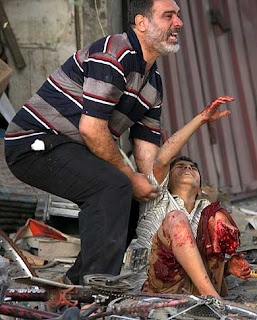 The debate is raging about how many Iraqi civilians have actually died during this war. The New England Journal of Medicine just published their findings, which is different from John Hopkins University’s findings.

John Hopkins University has done two national surveys in Iraq and have estimated the deaths at approximately 600,000 .

So those who want to make political hay out of this will say that those liberals at Johns Hopkins are inflating the numbers to make things look worse than they actually are.

But the question remains:
If our invasion of Iraq has cost at least 100,000 civilian deaths, how good can we, as a nation or as Christians who follow the Prince of Peace, feel about this?

Evangelical Christians have been the most supportive of this war. I believe we have some repenting to do.
Posted by Bob Robinson at 5/14/2008 3 comments: 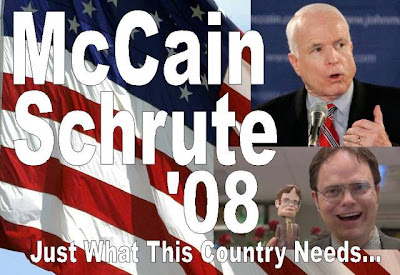 John McCain was just on The Daily Show with Jon Stewart and revealed that his running mate will be Dwight Schrute.
Whatever you think of his politics, you've gotta admit that John McCain has a great sense of humor.

Barack Obama, Jeremiah Wright, and the Problem with Race in America 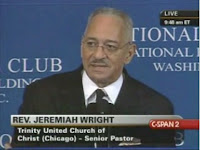 In last Wednesday’s editorial, The New York Times wrote, “It took more time than it should have, but on Tuesday Barack Obama firmly rejected the racism and paranoia of his former pastor, the Rev. Jeremiah Wright Jr., and he made it clear that the preacher does not represent him, his politics or his campaign. Senator Obama has had to struggle to explain this relationship ever since a video surfaced of Mr. Wright damning the United States from his pulpit.”

Here’s how I see this issue:

Most of what Jeremiah Wright says is actually not that crazy. I thought this after watching the sermons in question in their full context (here and here). I also thought this when I took the time to read the manuscripts from all three of his appearances this past week: On Bill Moyers Journal, at the National Press Club, and at the NAACP Dinner.

However, to read the words of those three appearances and to watch the videos of those same words are two different things. Wright’s style of delivery is over-the-top; Wright is the consummate showman. He is dramatic and bombastic. While his style may do well in the context of an African-American church, it does not do well in the context of C-Span, You Tube, and Fox News.

It certainly is not an appropriate rhetorical style for civil discourse. Barack Obama knows this. But Jeremiah Wright does not know this. He doesn’t have a clue. In fact, he purposely speaks in a manner that almost becomes a caricature of being “black,” purposely thumbing his nose at civility in the name of “cultural difference.”

I thought that the speech that Wright presented at the National Press Club was pretty insightful. He said that “the prophetic theology of the black church is a theology of liberation; it is a theology of transformation; and it is ultimately a theology of reconciliation.” As a Christian, I can say “Amen!” to all of these things.

However, at that same event, he began to lose us when he began to answer questions. That’s when he began being belligerent to the moderator and to all who were watching that are not familiar with him and his rhetorical style. The theatrical angry black preacher arrived, and it was inappropriate to the moment.

Wright’s dramatic, bombastic style is the polar opposite of the calm and purposeful style of Barack Obama.

No doubt, both men have the desire to talk about race and move the nation toward dealing with the issue. Wright comes at it from the angle of “Here I am, a black man with a chip on my shoulder! Blacks have been done wrong in the United States and the country must repent for this!”

Obama comes at it from a very different angle, one that says, “I am the product of mixed-race. I seek to think that we can progress past the sins of the past and change the future. While I honor the history of black culture and frustrations, I represent a new way to solutions.”

Some on the Right are wondering how Obama could have stayed in Wright’s church for 20 years. Bill O’Reilly and Sean Hannity, both Roman Catholic, are making the case that if a person has a problem with their church leaders, then they should leave their church. Yet, both remain Roman Catholic, in spite of the tremendous sexual scandals of the past few years in this church. I state this not to recommend that O'Reilly and Hannity leave their church, but to point out that one's choice of a religious community is a much more complex thing than simply liking or not liking the idiosyncrasies of the leadership of that community.
Posted by Bob Robinson at 5/06/2008 16 comments: