The fact that Jesus became a human and worked as a carpenter helps us reintegrate faith and work.
this is a parallel post with my new website, (re)integrate.
The reason Christmas fills me with wonder and awe is that it is the story of our all-powerful, all-knowing, eternal, sovereign, creator God humbling himself to become one of us.

“In him (Jesus Christ) all things were created: things in heaven and on earth, visible and invisible, whether thrones or powers or rulers or authorities; all things have been created through him and for him. He is before all things, and in him all things hold together.” (Philippians 1:15-17) 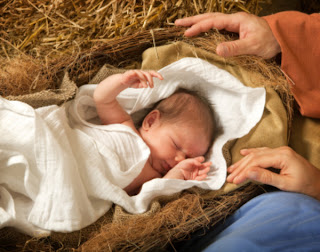 This is who Jesus is. And then there he is: Living for nine months in Mary’s womb – yes, Jesus was once a zygote! He grew into an embryo and then was birthed like every other baby. He was laid in a  feeding trough. The all-powerful creator God humbled himself to be completely dependent on Mary and Joseph to care for him.

“Christ Jesus, who, being in very nature God, did not consider equality with God something to be used to his own advantage; rather, he made himself nothing by taking the very nature of a servant, being made in human likeness.” (Philippians 2:6-7)

Jesus grew in wisdom and stature (Luke 2:52), under the care and tutelage of his parents. He apprenticed under Joseph and learned the noble vocation of carpentry.
Let this sink in: Before Jesus began traveling around proclaiming the good news of the Kingdom of God, before he suffered and died for our sins, before he was raised from the dead for our justification and victory over death, he spent the majority of his life building things with his hands.

“No doubt Jesus had strong, well worn, calloused hands. It is all too easy for us to overlook the fact that Jesus knew what it meant to get up and go to work every day. Jesus experienced both the exhilaration and the exhaustion of putting in a hard day’s work. Jesus faced work and a workplace profoundly affected by sin. I am sure Jesus dealt with difficult and demanding people in the workplace who complained about this and that.”

Jesus, the Son of God, worked.
One of my favorite comedians, Jim Gaffigan, does a bit on Jesus and his being a carpenter:

Why do I find this funny? Because it puts Jesus squarely on the earth – the same man who performed miracles built cabinets.
Dallas Willard, in The Divine Conspiracy, writes,

“If he were to come today as he did then, he could carry out his mission through most any decent and useful occupation. He could be a clerk or accountant in a hardware store, a computer repairman, a banker, an editor, doctor, waiter, teacher, farmhand, lab technician, or construction worker. He could have run a housecleaning service or repair automobiles. In other words, if he were to come today he could very well do what you do. He could very well live in your apartment or house, hold down your job, have your education and life prospects, and live within your family surroundings and time. None of this would be the least hindrance to the eternal kind of life that was his by nature and becomes available to us through him.”

Working with his hands day in and day out in a carpentry shop was not below Jesus. Jesus did not see his carpentry work as mundane or meaningless, for it was the work his Father had called him to do.

This Christmas, allow yourself to be amazed by the incarnation. God, who is spirit, became human, for we are material. The fact that Jesus came to earth and lived as a human being informs us of God’s view concerning the dignity of our humanness, and the dignity of the material world in which we live.
Frederick Buechner, in his great little book Wishful Thinking: A Seeker’s ABC wrote,

“The Word became flesh,” wrote John, “and dwelt among us” (John 1:14). That is what incarnation means. It is untheological. It is unsophisticated. It is undignified. But according to Christianity, it is the way things are.
All religions and philosophies which deny the reality or the significance of the material, the fleshly, the earthbound, are themselves denied. Moses at the burning bush was told to take off his shoes because the ground on which he stood was holy ground (Exodus 3:5), and incarnation means that all ground is holy because God not only made it but walked on it, ate and slept and worked and died on it. If we are saved anywhere, we are saved here. And what is saved is not some diaphanous distillation of our bodies and our earth, but our bodies and our earth themselves. Jerusalem becomes the New Jerusalem coming down out of heaven like a bride adorned for her husband (Revelation 21:2). Our bodies are sown perishable and raised imperishable (1 Corinthians 15:42).
One of the blunders religious people are particularly fond of making is the attempt to be more spiritual than God.

All work can indeed be holy. Let’s honor God with our work as we worship him because of the incarnation of Jesus Christ.
Posted by Bob Robinson at 12/11/2012 No comments: