American Patriotism and the Bible - This is Getting Ugly


In this video, Richard Lee, the editor of The American Patriot's Bible, says, 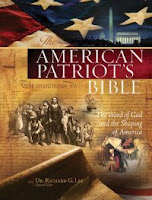 "I think that most of our hard-working citizens have a belief in their hearts that the Bible certainly has influenced many of our founding documents - documents such as the Declaration of Independence, The Constitution, and numbers of others. But they really can't put their hands on any valid proof or concrete facts concerning what they believe in their hearts about the Bible, about God, and about America. This is what The American Patriot's Bible will provide."

Did he really say that? Did he really admit that? Are Bible publishers going to really produce Bibles so that people will be able to placate what they want to believe in their hearts, rather than what the Bible actually teaches? And... in spite of the lack of "valid proof or concrete facts?"

At the OUT OF UR blog, Greg Boyd rightly skewers The American Patriot’s Bible.

"Every special interest Bible imposes a certain agenda that to some degree colors the Word, but the Patriot’s Bible takes this “coloring” to a whole new level. There’s not a single commentary in this Bible that even attempts to shed light on what the biblical text actually means. To the contrary, the text of the Bible is used merely as an excuse to further the patriotic agenda of the commentators...

"What disturbs me more is the way the commentators attempt to give their idealized version of American history divine authority by weaving it into the biblical narrative. The central assumption that undergirds the Patriot’s Bible is that America is, in a unique sense, a nation established, governed, blessed and protected by God. Throughout the Patriot’s Bible, but especially in the Old Testament, an explicit parallel is drawn between Israel and America."

The Kingdom of God is not America. It is, as Boyd says, "God’s trans-national Kingdom."

"The Kingdom that Jesus’ followers are to be committed to is one that expresses the 'one new humanity' Jesus died to create, a humanity for which all dividing walls of nation and race have been abolished (Eph. 2:14). In Christ, we are no longer to relate to each other in terms of nationality, social class or gender (Gal. 3:28-29)."

The three men known in evangelical circles as our best historians wrote an essential book on the issue of America's "Christian heritage." In The Search for Christian America, Mark Noll, Nathan Hatch, and George Marsden pops the balloon of the fallacies that people like Richard Lee are propagating. The fact is that you can count on one hand the number of founding fathers that were Christian. I encourage you to read my post in which I quote some of what Noll, Hatch, and Marsden wrote, and then get the book and read it, and pass this important information along to people in your congregation. We need to help God's people to not get sucked into the syncretism of conflating true biblical belief with "what they want to believe in their hearts" about American patriotism.

In a coming post at Out of Ur, Greg Boyd will offer "Part 2" of his critique. Also, a response from Richard Lee will also be featured on Out of Ur in the coming days. It will be interesting (and most likely infuriating) to hear Lee's defense of the indefensible.
Posted by Bob Robinson at 5/26/2009 10 comments:

Why the Rock Hall says: No Rush for you!

Prog rock gets ignored by the selection committee every year 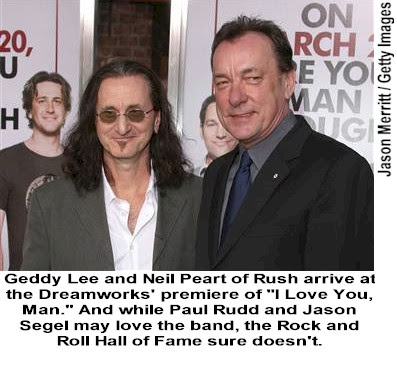 When the Rock and Roll Hall of Fame holds its annual induction ceremony April 4, there once again won’t be any progressive rock artists amongst its five honorees. The Rock Hall’s snubbing of the once-popular genre hasn’t gone unnoticed by its supporters.

In the past few years, fans of Yes and the Moody Blues have started online petitions to get those groups a nod. Blogs and Web sites question the Hall’s choices, as did Stephen Colbert when he interviewed Rush (who also have a campaign petition).

Decades ago, these groups packed thousands into stadiums and sold tons of vinyl by pushing the boundaries of rock. But evidence suggests their elaborate concept albums, impeccable musicianship and oblique lyrics might have pushed things too far for the Hall’s tastemakers.

The Hall began honoring performers in 1986, starting with pioneers like Chuck Berry, Little Richard and Elvis Presley. More recently, pop acts like Billy Joel, the Bee Gees and Madonna have made the cut, but Rush, Yes, the Moody Blues, Jethro Tull, the Electric Light Orchestra, Genesis, Emerson, Lake and Palmer and Soft Machine have not. Beyond Pink Floyd, the closest the Hall gets to prog is Queen (who flirted with the genre) and Police drummer Stuart Copeland, who played in Curved Air.

Prog rock (as it’s colloquially known) will especially be conspicuous in its absence at this year’s induction. Jeff Beck was already inducted with the Yardbirds (the Rock Hall has honored over a dozen musicians twice), while Little Anthony and Bobby Womack are artists with limited influence. Metallica and Run-DMC have leapfrogged over the classic prog bands with their nominations, since members of both groups were still in school when progressive rock ruled.

So who picked Run-DMC over Rush? Well, it’s a secret. Sort of.

According to Joel Peresman, president and CEO of the Rock and Roll Hall of Fame Foundation, Inc., the initial selections are made by a committee of 30 to 35 music business people — who Peresman won’t name.

READ THE REST OF THE ARTICLE, detailing the woeful nomination process here:
Why the Rock Hall says: No Rush for you!
Posted by Bob Robinson at 5/25/2009 4 comments: 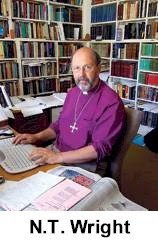 N.T. Wright weighs in on Steve Chalke and the controversy over his view of Penal Substitutionary Atonement:

I have just re-read Steve's short chapter on the meaning of the cross within the mission of Jesus. He says many things I agree with, and, though he doesn't actually make the main point that I made in Jesus and the Victory of God ch. 12, drawing on Isaiah 53 in particular, he does say,

Just as a lightning-conductor soaks up powerful and destructive bolts of electricity, so Jesus, as he hung on that cross, soaked up all the forces of hate, rejection, pain and alienation all around him. (The Lost Message of Jesus p. 179).

Earlier on in the chapter he had expressed puzzlement at how 'basic statements of the gospel' in ordinary churches would focus mainly on sin and judgment rather than with the love of God, and at the way in which the cross, seen as the answer to the punishment due for our sin, was becoming the sum and substance of the gospel to the exclusion even of the resurrection (except in the sense of a 'happy ending'). Steve is not alone in this puzzlement, and with good reason. As we shall see, the Bible and the gospel are more many-sided than that. It is in that context that Steve makes his now notorious statement: 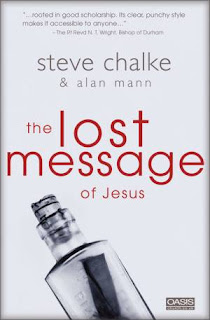 The fact is that the cross isn't a form of cosmic child abuse - a vengeful Father, punishing his Son for an offence he has not even committed. Understandably, both people inside and outside of the Church have found this twisted version of events morally dubious and a huge barrier to faith. Deeper than that, however, is that such a concept stands in total contradiction to the statement that "God is Love". If the cross is a personal act of violence perpetrated by God towards humankind but borne by his Son, then it makes a mockery of Jesus' own teaching to love your enemies and to refuse to repay evil with evil. (p. 182f.)

Now, to be frank, I cannot tell, from this paragraph alone, which of two things Steve means. You could take the paragraph to mean (a) on the cross, as an expression of God's love, Jesus took into and upon himself the full force of all the evil around him, in the knowledge that if he bore it we would not have to; but this, which amounts to a form of penal substitution, is quite different from other forms of penal substitution, such as the mediaeval model of a vengeful father being placated by an act of gratuitous violence against his innocent son. In other words, there are many models of penal substitution, and the vengeful-father-and-innocent-son story is at best a caricature of the true one. Or you could take the paragraph to mean (b) because the cross is an expression of God's love, there can be no idea of penal substitution at all, because if there were it would necessarily mean the vengeful-father-and-innocent-son story, and that cannot be right.

Clearly, Steve's critics have taken him to mean (b), as I think it is clear Jeffrey John and several others intend. I cannot now remember what I thought when I read the book four years ago and wrote my commendation, but I think, since I had been following the argument through in the light of the arguments I myself have advanced, frequently and at length, about Jesus' death and his own understanding of it, that I must have assumed he meant (a). I have now had a good conversation with Steve about the whole subject and clarified that my initial understanding was correct: he does indeed mean (a). The book, after all, wasn't about atonement as such, so he didn't spell out his view of the cross in detail; and it is his experience that the word 'penal' has put off so many people, with its image of a violent, angry and malevolent God, that he has decided not to use it. But the reality that I and others refer to when we use the phrase 'penal substitution' is not in doubt, for Steve any more than for me. 'There is therefore now no condemnation' in Romans 8.1 is explained by the fact, as in Romans 8.3, that God condemned sin in the flesh of his Son: he bore sin's condemnation in his body, so we don't bear it. That, I take it, is the heart of what the best sort of 'penal substitution' theory is trying to say, and Steve is fully happy with it. And this leads to the key point: there are several forms of the doctrine of penal substitution, and some are more biblical than others. What has happened since the initial flurry of debate about The Lost Message of Jesus has looked, frankly, like a witch-hunt, with people playing the guilt-by-association game: hands up anyone who likes Steve Chalke; right, now we know who the bad guys are. 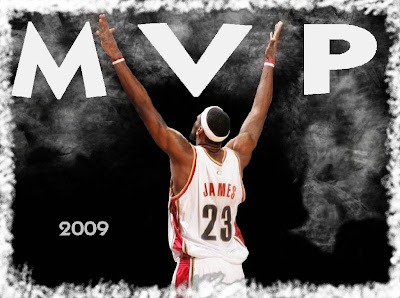