Straw Men – The Emerging Church is Filled with Hard Postmodernists

John MacArthur versus the Emerging Church - 4
Review of The Truth War: Fighting for Certainty in an Age of Deception 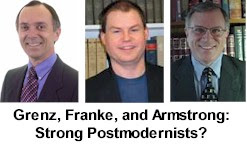 MacArthur places a spotlight on Stan Grenz and John Franke’s book (Beyond Foundationalism: Shaping Theology in a Postmodern Context) as well as John Armstrong’s acceptance of the Grenz/Franke view (which irritates MacArthur because Armstrong had once been a strong ally of MacArthur, willing to write polemics in the fight for traditional Calvinist Theology). However, the spotlight only shines where MacArthur wants it to shine, in order to keep what these men believe in the shadows.

“Armstrong, Grenz, Franke, and the Emerging postmodernists have blurred the line between certainty and omniscience. They seem to presume that if we cannot know everything perfectly, we really cannot know anything with any degree of certainty…The fact that our knowledge grows fuller and deeper—and we all therefore change our minds about some things as we gain more and more light—doesn’t mean that everything we know is uncertain, outdated, or in need of an overhaul every few years.” (pp. 21-22)

MacArthur’s presumption is that the Emerging Church is filled with hard postmodernists.

But this is simply not true.

Most of us are either chastened foundationalists or soft postmodernists. We know that it is impossible to separate the "Subject" (the one seeking to "know") from the "Object" (that which we are seeking to "know"). Humans are limited and fallible, which affects everything in our epistemology. Everything we know, and everything that we can say about what we know, is to one degree or another limited and influenced by who we are, what we think, how we communicate, and what we want to be true. In other words, we agree with classic Christian theology that says that since we are fallen human beings, our minds’ ability to think correctly is deeply flawed. This is known as the noetic effect of sin. We are in need of God’s grace so we can “know God” in truth.

He too easily dismisses these author's own insistence that Scripture is the normative authority for doctrine and practice. Why? I suspect that it is because it is easier to write a polemic against somebody if you paint them as terrible boogy-men than if you deal honestly with what they really say.


The Entire Series:
1: John MacArthur’s Post-Enlightenment Philosophical Understanding of “Truth”
2: Is Rob Bell a Godless Man, Condemned by God?
3: Is Postmodernism Primarily Concerned with Truth?
4: Straw Men – The Emerging Church is Filled with Hard Postmodernists
5: MacArthur Fits His Own Criteria for an Apostate

I still have not forgotten the ridiculously written Charismatic Chaos that Macarthur wrote years ago.

Same mean-spirited M.O. with straw men propped up and shot down.

God bless the man but there has to be a better approach to challenging and questioning theological positions.

It's next to impossible for me to work up a desire to engage with someone like MacArthur. For one, I don't want to turn him into a straw man, which is a very real temptation. For another, in my present context I am not in relationship with anyone who thinks like MacArthur, so the things he is saying are moot.

Finally, (at the risk of setting up a straw man) MacArthur's conflation of faith and certainty reveals the weakness of an approach to Christianity that is so focused on Scripture that it fails to understand the history and philosophy underlying the very conceptual framework(s) it is using...

sheesh... has MacArthur actually visited some of the EC churches? is any of that documented in his book?

We'll have to see. I'm continuing to read the book. Watch for more here in the Vanguard!

If I may be so bold... I'm not sure you've felt the full force of the postmodernist critique of modernist idols. Your other MacArthur posts tipped me off; this one with its "chastened foundationalists" and "soft postmodernists" confirmed it. Your descriptions usually apply to most thinking Christians -- I know a true-blue Cartesian analytic philosopher who would agree with most of what you write. Thing is, the criticisms of foundationalism (say, from Sellars) apply to all forms. Truly embrace fictivity or abandon representationalism and I think you'll understand why tying "chastened foundationalists" and "soft postmodernists" together belies a fairly deep misunderstanding. That said, much of your criticism of MacArthur is quite solid and I'm glad somebody's fisking him because his book is a travesty.