John MacArthur versus the Emerging Church - 1
Review of The Truth War: Fighting for Certainty in an Age of Deception 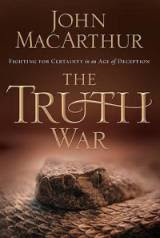 John MacArthur’s latest book seeks to take up the battle against those he claims have crept into the contemporary church as Christian teachers, but are actually denying the truth of Jesus Christ.

In his Introduction, MacArthur writes, “Scripture describes all authentic Christians as those who know the truth and have been liberated by it (John 8:32). They believe it with a whole heart (2 Thessalonians 2:13). They obey the truth through the Spirit of God (1 Peter 1:22). And they have received a fervent love for the truth through the gracious work of God in their hearts (2 Thessalonians 2:10)…Clearly, the existence of absolute truth and its inseparable relationship to the person of God is the most essential tenet of all truly biblical Christianity. Speaking plainly, if you are one of those who questions whether truth is really important, please don’t call your belief system ‘Christianity,’ because that is not what it is. A biblical perspective of truth also entails the recognition that ultimate truth is an objective reality. Truth exists outside of us and remains the same regardless of how we may perceive it.” (pp. xix-xx).

The presumption that MacArthur makes is that these biblical authors had the same conception of “truth” that the post-enlightened MacArthur has. My question to MacArthur is this: Would pre-Enlightenment biblical writers think of truth as “an objective reality?" Or, would they rather think of "truth" as something that they have seen and experienced?

This is the subtle nuance that we must understand if we are going to understand MacArthur’s point-of-view. It is a matter of how we define “truth.” MacArthur defines it in a philosophical manner that reflects his modernist, post-Enlightenment mindset. Truth is objective reality; something we can know through objective scientific observation that can be articulated with words that correspond to that objective reality. Above all, “truth” is that which is irrefutable and foundational to everything else. These irrefutable statements are the foundation upon which everything else we know can be based. For the modernist post-Enlightenment mind, without this kind of “truth,” our whole world would unravel into chaotic anarchy.

So, when MacArthur reads the texts he cites above, he reads “truth” as that which conveys objective, irrefutable reality, i.e., as foundational propositions that explain what is real.

What if, however, we defined “truth” in these passages in a way that a pre-modern Christian would, without all the baggage of Enlightenment philosophy? What if “truth,” according to the pre-modern mind, was simpler than all that? It could simply be that which explained experiences as they really happened, and it would be less tied to propositional statements and more tied to relational witness. "Truth," to the pre-Enlightenment mind, was probably less about statements that they would irrefutably base their lives upon and more about people and experiences.

For instance, in John 8:31-32 (cited above in the quote from MacArthur's book), Jesus says, “If you hold to my teaching, you are really my disciples. Then you will know the truth, and the truth will set you free.” To MacArthur's modern enlightenment mind, the truth of the teachings is what sets you free. But what if these pre-moderns understood the “truth” that sets people free not just as Jesus’ teachings (as if his teachings, in and of themselves, can set people free) but as the very person of Jesus—that Jesus is the one who sets people free? For MacArthur, the teachings of Jesus have power, in and of themselves, because they are truth statements. This is no small distinction: Does a "teaching" have inherent power to set anybody free? Or is it the person of Jesus that sets people free? MacArthur's modernist approach to "truth" disconnects the person of Jesus from his teachings.

I contend that the pre-modern would have understood that the "truth" that sets people free as Jesus himself. In fact, later in the Gospel of John, Jesus indeed calls himself “the truth” (John 14:6). Jesus' teachings are not some objective truth devoid of the relational aspect of Jesus himself. Jesus' teachings do not exist in a vacuum. Without Emmanuel (God with us) conveying truth in person, the teachings cannot set people free.

This is where the confusion rests: MacArthur is upset that Emerging Church types are calling into question modernist conceptions of “truth.” MacArthur presumes that what this means is that the basis for faith, that is "truth" (the claims that Jesus is who he really is, did what he really did, and offers salvation to the world because of this), is being attacked.

This is a major misunderstanding by MacArthur. Just because we don’t buy the Enlightenment conception of “truth” does not mean that we deny a pre-Enlightenment conception of “truth.” MacArthur fears that those in the Emerging Church are completely rejecting the idea of “truth,” but this simply is not the case. What we are questioning is the modernist philosophical faith in knowing absolute truth as the basis of everything in life, especially things of faith.

"The presumption that MacArthur makes is that these biblical authors had the same conception of “truth” that the post-enlightened MacArthur has. My question to MacArthur is this: Would pre-Enlightenment biblical writers think of truth as “an objective reality?" Or, would they see "truth" as something that they have seen and experienced?"

That is the real question, isn't it? Great post.

Great piece. Before i had the utmost respect for JM. But now, the things that he writes are just bizzare. I get sick in my stomach when i read the things he writes. It's sad when a christian like him is accusing (and with force) a fellow believer or christians for that matter (the emerging church) and use these baseless and condemning words. I have sad regrests that some 'christians' are so judgemental that they arent even listening or reading the points others are making. I for one have been helped by those in the emerging conversation. Although i dont totally agree with everything they say, im glad that people are asking questions. I like that. but anyway im glad someone reviewed JM's book. kudos

""Truth," to the pre-Enlightenment mind, was probably less about statements that they would irrefutably base their lives upon and more about people and experiences."

I'm sympathetic to your understanding of MacArthur as adopting an interpretive stance embedded in history, whether he realizes it or not. However, I'd like to push you a bit on your alternative. Is there really one formulation of "truth" prior to the Enlightenment? (Quite obviously, not.) Did pre-moderns understand truth experientially? (A question mal pose.) This is a historical claim that requires substantial backing. To take one obvious objection - think of the scholastic arguments based on syllogistic reasoning, hardly straightforward, "simple" understandings of truth based on experience. While there are obviously important approaches to truth to be admired in pre-modernity, I don't think it is either very simple, straightforward, or something we need adopt simply in place of modernity (whatever the latter term actually means).

I don't know which is worse, MacArthur's concept of truth, or the fact that so many of his followers accept what he says uncritically and assume he has the last word (or next to the last word, if we put God in the equation...) on truth. I served as an elder of a large church in the midwest, and when someone left the church for doctrinal reasons, the usual method was to write (usually by email) to tell us we were preaching heresy, then attach some MacArthur article as proof. No amount of calls and pleading would get these people to talk to me.

That's what I really find sorry and sad about MacArthur. Mess yourself up, that's one thing, but drawing others into your error is inexcusable.

Good post Bob, I think you’re right that these kinds of arguments are much more about defending modernity than they are Christianity. I strongly agree with your post and at the same time, after reading through the comments, I think that knsheppard’s caution is reasonable. In addition to that, I do think modernity has provided us with a unique lens in which we can view truth that we have not had before the enlightenment. The problem is that many, like MacArthur, do not recognize that they are looking at truth through a lens themselves. I would not deny that there is such a thing as “objective” truth, but I do seriously question how we can experience it objectively ourselves. This is where modern evangelicals seem to get lost when they deny the subjective aspect of the gospel and truth of Jesus Christ. You are right on in your assertion that truth was given to us as a person in Jesus Christ. And truth is something we then experience through our relationships with not only God through Christ but also our neighbor. In the end, even though the enlightenment and modernity may have value as a legitimate lens, if that lens becomes exclusive it ends up making the truth of Christ and the gospel very shallow.

John tells us that Jesus was the Word, so it would seem logically that His teachings (ie His Words) would set us free.

A new site on the Emerging Church adds to the debate: