Is Postmodernism Primarily Concerned with Truth?

John MacArthur versus the Emerging Church - 3
Review of The Truth War: Fighting for Certainty in an Age of Deception 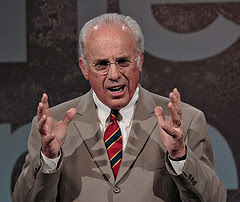 The title of John MacArthur’s book should give us a clue to its major premise.
First, MacArthur defines truth.

“So what is truth? Here is a simple definition drawn from what the Bible teaches: truth is that which is consistent with the mind, will, character, glory, and being of God. Even more to the point: truth is the self-expression of God.” (p. 2)

Few, if any, Christians would find anything in that definition to argue with. I think that even most of those in the Emerging Church conversation could go along with that definition.

“Postmodernism in general is marked by a tendency to dismiss the possibility of any sure and settled knowledge of the truth. Postmodernism suggests that if objective truth exists, it cannot be known objectively or with any degree of certainty.” (pp. 10-11)

Here’s where we should pause and ask, Does MacArthur correctly identify the key characteristic of Postmodernism?

I’d say, no. There is a lot more going on in Postmodern thought than simple rejection of truth and certainty. MacArthur offers just a shallow assessment of the Postmodern crisis.

Postmodernism has more to do with the limits of language and those in power using "word games" to manipulate the marginalized than it does with the simple rejection of a settled knowledge of truth and certainty.

Postmodernism’s incredulity to truth claims and certainty has a deeper root that MacArthur never seeks to understand. His simplistic assessment of Postmodernism only goes as deep as “the attack on propositional truth is the natural and necessary outworking of postmodernism’s general distrust of logic, distaste for certainty, and dislike for clarity. To maintain the ambiguity and pliability of ‘truth’ necessary for the postmodern perspective, clear and definitive propositions must be discounted as a means of expressing truth.” (P. 16)

That is intriguing rhetoric, but it offers little deep analysis of the postmodern turn.

Quite right. Postmodernism is (and I'm generalizing in the extreme!) a suspicion towards authority and/or power; an inkling that an unjustified power-play is lurking beneath all truth claims. It is not about truth: it is about justice and especially the injustice masked by "truth."

Matt,
That is very well said.