Why Pastors are Suffering Burn-Out 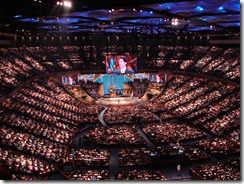 G. Jeffrey MacDonald, in an op-ed published today in the New York Times, gives good insight into why pastors are feeling like they are losing their calling: “congregational pressure to forsake one’s highest calling.”

The pastoral vocation is to help people grow spiritually, resist their lowest impulses and adopt higher, more compassionate ways. But churchgoers increasingly want pastors to soothe and entertain them. It’s apparent in the theater-style seating and giant projection screens in churches and in mission trips that involve more sightseeing than listening to the local people.

Pastors are often placed between a rock and a hard place: They know what they should be doing for their congregations, but few in the congregations want that. And like so many American institutions, “success” is defined by numbers. If attendance goes down, then you are failing. Never mind the fact that in a consumerist age, people may not want to attend a church that challenges them too much.

The trend toward consumer-driven religion has been gaining momentum for half a century. Consider that in 1955 only 15 percent of Americans said they no longer adhered to the faith of their childhood, according to a Gallup poll. By 2008, 44 percent had switched their religious affiliation at least once, or dropped it altogether, the Pew Forum on Religion & Public Life found. Americans now sample, dabble and move on when a religious leader fails to satisfy for any reason.

In this transformation, clergy have seen their job descriptions rewritten. They’re no longer expected to offer moral counsel in pastoral care sessions or to deliver sermons that make the comfortable uneasy…

…Congregations that make such demands seem not to realize that most clergy don’t sign up to be soothsayers or entertainers. Pastors believe they’re called to shape lives for the better, and that involves helping people learn to do what’s right in life, even when what’s right is also difficult. When they’re being true to their calling, pastors urge Christians to do the hard work of reconciliation with one another before receiving communion. They lead people to share in the suffering of others, including people they would rather ignore, by experiencing tough circumstances — say, in a shelter, a prison or a nursing home — and seeking relief together with those in need. At their courageous best, clergy lead where people aren’t asking to go, because that’s how the range of issues that concern them expands, and how a holy community gets formed.

I’d add that in the many ministries I’ve been involved with, the congregants haven’t taken kindly to challenges to their lifestyles (especially in suburban, affluent churches), or challenges to their political ideologies (especially when they’ve equated what Glenn Beck and the rest of the Fox News Channel propagate with Christian doctrine), or calls for their families to live sacrificially for the sake of others (especially when they’ve bought into the “American Dream” and believe that, in order to be good parents, they must give their children everything that they want to be happy).

It’s enough to cause a pastor to lose heart.

Bob, FYI, your link to the NTY article is pointing to the wrong article. Correct link: http://www.nytimes.com/2010/08/08/opinion/08macdonald.html?scp=1&sq=jeffrey+macdonald&st=nyt

Thanks for the heads-up. It's corrected.