Which is the new Calvinism? “Neo-Puritanism” or “Neo-Calvinism?”

Time and Newsweek are not familiar with the important distinction

***
UPDATE: for a revised and updated version of "Neo-Calvinism and Neo-Puriatanism" please go to my new website, www.re-integrate.org, and my most recent post on this subject:


So What’s Wrong with Neo-Calvinism?

Time and Newsweek recently ran cover stories featuring two slants on Calvinism in America. Newsweek’s Jon Meacham wrote, “While we remain a nation decisively shaped by religious faith, our politics and our culture are, in the main, less influenced by movements and arguments of an explicitly Christian character than they were even five years ago… Many conservative Christians believe they have lost the battles over issues such as abortion, school prayer and even same-sex marriage, and that the country has now entered a post-Christian phase.”

On the other had, Time’s David Van Biema wrote, “Calvinism is back… John Calvin's 16th century reply to medieval Catholicism's buy-your-way-out-of-purgatory excesses is Evangelicalism's latest success story, complete with an utterly sovereign and micromanaging deity, sinful and puny humanity, and the combination's logical consequence, predestination: the belief that before time's dawn, God decided whom he would save (or not), unaffected by any subsequent human action or decision.”

In other words, while Calvinism is losing influence in the general public, it is actually growing among the faithful. This frightens me. It has all the signs of an escalated cultural clash.
Is there a better way?

The answer is found in the fact that Time and Newsweek are not familiar with an important distinction. Time’s Biema called John Piper, Mark Driscoll, and Albert Mohler “Neo-Calvinist ministers” (no doubt thinking he had invented this term to describe these “New Calvinists”). 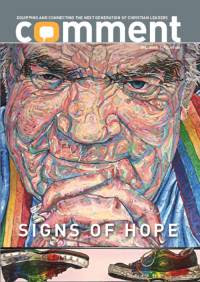 But Piper, Discoll, and Mohler are not “Neo-Calvinists,” they are actually “Neo-Puritans.” Ray Pennings, in the December, 2008 issue of Comment, wrote an article titled, “Can we hope for a neocalvinist-neopuritan dialogue?” In it, he explained, “We have two streams flowing from a single source, but in very different directions.”

While both neopuritanism and neocalvinism are concerned about personal piety as well as cultural influence, they come at these things from different angles. Neopuritanism focuses on “the sovereignty of God in salvation.” Neocalvinism focuses on “the sovereignty of God over creation.” Pennings writes, “Neopuritanism is slanted more towards individual piety and churchly revival, and neocalvinism is slanted more towards corporate activism and cultural renewal.”

Neopuritanism harkens back to John Owen, Richard Baxter, and of course Jonathan Edwards (John Piper’s favorite, and now the favorite of many who enjoy Piper’s enthusiastic writings). Neopuritanism appropriately enlarges our view of God’s authority and thus our view of evangelism, worship, and the church’s role in society. It is what drives much of the religious cultural clashes in American society, including issues of prior generations like prohibition, and today’s issues like gay marriage. It starts with personal piety and moves out toward society, seeking all in the society to live by these pious standards.

Neocalvinism harkens back to Abraham Kuyper, the 19th Century Dutch cultural leader who famously said, “There is not a square inch in the whole domain of human existence over which Christ, who is sovereign over all, does not cry, ‘Mine!’” Neocalvinists, while embracing the Church as God’s people on earth, focus not on church itself, but on “life beyond the church.” Pennings writes, “Their Calvinism has a ‘changing the world’ comprehensiveness. It focuses on all spheres of society and puts the restoration of the creation in clear view.” It starts with the desire to bring all things in society under the good intentions of Jesus Christ, but not for the purpose of protecting us Christians from the "heathens" in society. And not for the purpose of coercing everybody in the society to bow to the rules of our puritanical God. No, it starts with a deep desire to see good done to all people, to bring hope and justice into the world as Jesus would have it, to bring heaven onto earth so that people can experience the goodness of God.

Neocalvinists legitimately seek to transform the world, and through our gospel work of bringing Christ's good Lordship over the brokenness of the world, people will see the gospel lived out. As we live our lives seeking the progress of society, we explain to people that Jesus came to make all things right, and that he desires all people to follow him as their Lord and Savior. As people experience the reality of our seeking the good of our society, then they see that Christianity has more to offer than a set of doctrines that you must affirm and a code of personal ethics that you must painfully follow. It is much broader, much more all-encompassing. It affects all of life.

Attention Time Magazine! This is the kind of "Idea" that can "Change the World Right Now" - a truly new kind of Calvinism. Neocalvinism.

Posts in this series on Neo-Puritanism and Neo-Calvinism

Posted by Bob Robinson
Email ThisBlogThis!Share to TwitterShare to FacebookShare to Pinterest

"seeking all in the society to live by these pious standards."

I like your definition. I have always thought that these folks want everyone to "behave" so they will feel more comfortable.

I guess that would put me in the "Neo-Calvinism" group.

Your entire post was excellent, and I particularly liked this:

"It starts with the desire to bring all things in society under the good intentions of Jesus Christ, but not for the purpose of protecting us Christians from the "heathens" in society. And not for the purpose of coercing everybody in the society to bow to the rules of our puritanical God. No, it starts with a deep desire to see good done to all people, to bring hope and justice into the world as Jesus would have it, to bring heaven onto earth so that people can experience the goodness of God."God's purpose in Christ is a Cosmic redemption that takes all of His creation into its grasp...not every individual human being, but every facet of the created order.

Quite interesting. It does seem the Calvinism I'm around in Grand Rapids (Calvin College, etc.) is much more the Kuyperian kind. I wouldn't hardly know from my vantage point looking at the Calvinism here, that the other ("neo-Puritanism") even exists.

Ted,
That's exactly right. Calvin College is the key institution in the United States of neocalvinism.

Christian Reconstructionists have called themselves Neo-Puritan. To my mind, they are much closer to Puritanism than Piper or Mohler.

From Steve Bishop's An Accidental Blog_

When neo doesn't mean new-
Ever since the Time Magazine decided that "new calvinism" was the no 3 idea that was changing the world many have been confusing the so-called "new calvinism" with neo-calvinism.

He then goes on to say "The New Calvinists are committed to complementarianism in the home and church."

This is certainly no neo-calvinism. Neo-calvinism goes back (at least) to Kuyper.

Those that confuse the two include:
* Timothy Stanley
* Best of Both worlds
* Pastoral Musings from the Rain City
* Unfinished Christianity
* Axxess
* Alan Hirsch

Neo-calvinism has several distinctives. These are a far cry from the often pietistic and puritan emphasis of the 'new calvinists'. Here are several of these distinctives:
* Jesus is lord over all of creation
* The idea that all of life is to be redeemed
* Cultural mandate
* Creation, fall and redemption
* Sphere sovereignty
* A rejection of dualism
* Structure and direction
* Common grace
* The antithesis
* Worldviews
* The role of law

So, in this case new calvinism is not equal to neo-calvinism.

In fact, R Scott Clark has argued that Mark Driscoll isn't even a calvinist!

Have you seen the new Calvin resources at calvin500.com? Logos Bible Software has begun a massive digitization project of almost 100 books by and about Calvin—46 volumes of commentaries, 5 editions of the Institutes, 4 volumes of letters, dozens of tracts and treatises, 10 biographies, and 20 volumes on the history of Calvinism. I thought you might be interested!

Bob, This is thrilling, and so helpful...more could be said, of course, but you've done the best job so far in calling attention to this. Way to go.

I have been hearing alot of harsh statements from the reformed/Calvinistic community about the “new” Calvinism over the last year. Seems like its pretty much 3 issues the “traditional” reformed, is complaining about this “new”Calvinism.


1)that they not “truly” reformed cause they don't follow the “traditional” a Presbyterian/reformed church government. Well lets see the particular baptists did not have “reformed” church government. They were just as bit as Calvinistic as the Presbyterians and congregationalists. Either do the congregationalists, but one would be hard pressed to say that Johnathon Edwards was not Calvinist.

2)The new Calvinism is not truly “Reformed” cause they may not in some churches follow the “traditional” reformed confessions like the Westminister Standards or Three Forms of Unity or neither of London Baptist confessions. This is totally not true. I have seen some “independent/bible” type churches confessions of faith over the years and their pretty calvinistic

3)that these new Calvinists are too “spirit-filled”,”fruits of the spirit”. Well im sure the first Great Awakening was that way and it was very Calvinistic


I guess my point is just cause a church or a movement is not your “type” of Calvinism. That doesn't mean they are not true blue Calvinists. I mean if u follow the 5 points”Tulip” in your theology, you are considered Calvinist.