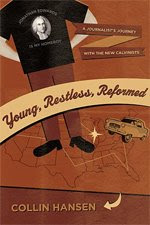 Collin Hansen, in his book, Young, Restless, Reformed: A Journalist's Journey with the New Calvinists, says that as a new (and the youngest) editor at Christianity Today, it was assumed that he knew a lot about the emerging church. However, “I didn’t know anyone who was emerging.”

Instead, what he did notice was something else: “After one staff discussion about the emerging church, I talked…with my boss at CT. I expressed concern that when Christianity today reports about the emerging church, we might give the impression that this group will become the next wave in evangelicalism. If anything, in my limited sphere I saw a return to traditional Reformed theology. My friends read John Piper’s book Desiring God and learned from Wayne Grudem’s Systematic Theology. They wanted to study at the Southern Baptist Theological Seminary.”

While in college at Northwestern, Hansen was in Campus Crusade, and recently he has been taking graduate courses at Trinity Evangelical Divinity School.

This all sounds very familiar to me. I came to faith in a Campus Crusade modeled ministry and then entered and finished the M.Div. program at Trinity Evangelical Divinity School. While at TEDS (and this was 15 years ago!), Piper was all the rage. Everyone read Desiring God and Piper gave the addresses for our preaching lecture series. The Calvinist New Testament scholar D.A. Carson was the seminary’s resident celebrity (since we was so widely respected), and Wayne Grudem was just publishing his Calvinistic theology text. This is when I became a neopuritan (in spite of Scot McKnight’s protestations!). I could have worn the t-shirt that’s on Hansen’s book cover, proclaiming, “Jonathan Edwards is My Homeboy.”

But since then, I have discovered another kind of Calvinism: a Calvinism that has been called “Neocalvinism” long before John Piper became famous and the conservatives in the Southern Baptist Convention proclaimed that Calvinism is that which reflects biblical truth more accurately. It is a Calvinism rooted in Dutch Reformed movements, rather than rooted in the Puritans.

As I’ve been writing about this the last few days, I felt that it might be helpful to compare the “New Calvinists” that Hansen writes about in his book (which I’ve been calling “Neopuritans,” based on the classification by Ray Pennings) with the “Neocalvinists.” There are neocalvinist analogues to the people, events, and places that Hansen has in his book. This week, I will provide you with these analogues.


Other posts in this series:
also:

I guess my dissent is rooted in the fact that "Neo-Puritans" routinely reject the Westminster Confession for the American revision. The WCF (1647), however, is another way to get what many find in Neo-Calvinism, especially in the WCF's understanding of the civil magistrate. It's "un-American," and that's probably its strength.

Nicely put. I look forward to reading more. Your evolution via the Puritans to the Dutch is so very similar to mine. I first read Packer's book "Pursuit of Godliness" back in '93 and found refuge in the Puritans for many years. Since then, I have found Dooyeweerd and am continuing in my studies of his work. It has been a healing balm in my life.

Also, I share your love of drums, drummers and drumming!!