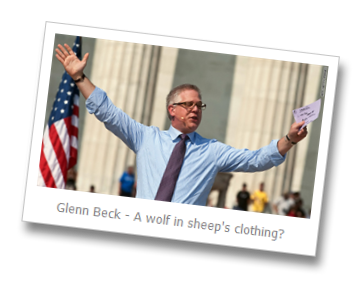 Over the weekend, because of Glenn Beck’s “Restoring Honor” rally in Washington DC, this blog was smokin’ with visitors, reading my post “Glenn Beck is a False Prophet.”

I am grateful that so many people were investigating this.

In that post, I said that Beck is a false prophet because he is claiming to hear from God a "Plan" and is acting prophetic in proclaiming that all Christians should "get behind God" concerning Beck’s plan. If Beck were a confessing Christian, I'd be wary of this, but I have a major issue with this because he is a confessing Mormon.

The "god" of Mormonism is not the God of Christianity. Mormons are polytheists, believing in many gods, each ruling individual planets.

The "god" of Mormonism is not eternal, but was once a man.

The “god” of Mormonism has a physical body and so does his wife.

The “god” of Mormonism does not exist as a Trinity. Father, Son, and Holy Spirit are three separate gods.

The “Jesus” of Mormonism was created by sexual union between God and Mary. He was married. His death does not provide atonement for sin.

“Salvation" for a Mormon is not granted by grace by faith in the Lordship of Jesus Christ, but in our exultation into being gods ourselves.

It’s important that evangelicals know that when Glenn Beck uses Christian language—talking about Jesus Christ, salvation, etc.—he is using terms that mean one thing to evangelicals and a different thing to himself as a Mormon. He is increasing his evangelical following because too many people are unaware of his equivocations.

The Apostle John warned about in this in his first letter:
"Dear friends, do not believe every spirit, but test the spirits to see whether they are from God, because many false prophets have gone out into the world. This is how you can recognize the Spirit of God: Every spirit that acknowledges that Jesus Christ has come in the flesh is from God, but every spirit that does not acknowledge Jesus is not from God. This is the spirit of the antichrist, which you have heard is coming and even now is already in the world." (1 John 4:1-3)

Again, in spite of his Christian rhetoric, Beck does not acknowledge the Jesus revealed by orthodox Christianity. Period.

Beck appeals to evangelicals who champion conservative politics because he uses the rhetoric of a radio evangelist. He consistently attacks Barack Obama with religious arguments. Beck recently said,

“You see, it’s all about victims and victimhood; oppressors and the oppressed; reparations, not repentance; collectivism, not individual salvation. I don’t know what that is, other than it’s not Muslim, it’s not Christian. It’s a perversion of the gospel of Jesus Christ as most Christians know it.”

But I have to ask, What right does a Mormon have to accuse anybody else of perverting the Gospel of Jesus Christ?

Would you approve or disapprove if some of America's evangelical pastors and religious leaders announced they were going to show up at "Oprah's Divine Destiny" meeting at the Kennedy Center for an evening that would include uplifting music and nationally-known religious figures from all faiths as they unite in prayer and recite historical speeches? Would it concern you if you knew that on her radio program Oprah has taught the book called A Course in Miracles written by Helen Schucman? This book and the workbook include such quotes as:

"A slain Christ has no meaning."
"The recognition of God is the recognition of yourself."
"Do not make the pathetic error of 'clinging to the old rugged cross'."
"My salvation comes from me."

True Bible-believing Christians would not approve of evangelical pastors and leaders uniting with Oprah in a self-described, religious and spiritual meeting. Why? Because most Biblically thinking Christians do not agree with Oprah's liberal politics and they know that the truth of God's Word and Oprah's pagan spirituality do not mix.

However, many of these same Christians will have no problem when some of America's evangelical pastors join radio personality and television host Glenn Beck for a spiritual program, because unlike Oprah, they share Beck's conservative, political views. To many it makes no matter that Beck is a self-described Mormon because his political views trump his religious views and for this reason many will justify taking part in "Glenn Becks Divine Destiny" program at the Kennedy Center on August 27th.