What Was Wrong with Glenn Beck’s Restoring Honor Rally? 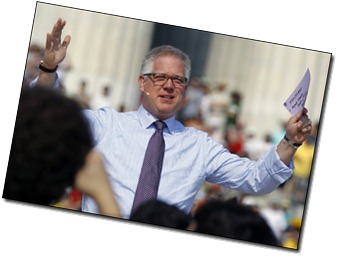 I’ve heard it a lot from friends that support Glenn Beck: Come on, Bob! Why are you so upset with Glenn Beck and his “8/28 Restoring Honor” rally on the National Mall in Washington DC? Is it that you are so politically left that you can’t stand a right-winger successfully gathering hundreds of thousands to talk about God and Country?

Even the Huffington Post reports that the “Glenn Beck 'Restoring Honor' Rally Delivers Religious, Not Political Message”. So what’s to criticize about that?

But there are huge problems with evangelicals embracing Glenn Beck as a spiritual leader. Beck is very clear: He intended the "9/28 Restoring Honor” not to be a political event but a spiritual one. He talked a lot about how he prayed with people, and he began his main speech by saying, “Lord, speak slowly!”

A commenter on my earlier post, Glenn Beck is a False Prophet, said, “Stop twisting the truth just because you dont believe in the politics that follow a righteous life. Glenn never once promotes Mormonism, just the belief of return to our maker as our founding fathers did.”

Really? I beg to differ.

Glenn Beck’s Mormonism warps his ability to discern myth from truth about America being a “Christian Nation.”

His zeal to “restore honor” to America is directly linked to his Mormon beliefs. At the 8/28 Rally, Beck said,

“The story of America is the story of humankind. 5,000 years ago, on the other side of the planet, God’s chosen people were led out of bondage by a guy with a stick who was talking to a burning bush. Man first started to recognize God and God’s laws. The chosen people listened to the Lord. At the same time those things were happening on this side. On this land, another group of people were gathered here and they too were listening to God. How these two people were brought together, again, happened because people were listening to God. They didn’t have the right to worship God the way they saw fit so they got down on their knees. And they didn't want to come to this land, they just did because they felt that’s what God was telling them to do. And with malice towards none they got into their boats and they came. God’s Chosen People: The Native Americans and the Pilgrims.” (see the video here)

The Book of Mormon tells the story that a small band of Israelites under Lehi migrated from Jerusalem to the Western Hemisphere about 600 B.C. Upon Lehi's death his family divided into two opposing factions, one under Lehi's oldest son, laman (the father of the Lamanites), and the other under a younger son, Nephi (the Nephites). “The Lamanites, from whom many present-day Native Americans descend, remained to inhabit the American continent… The role of Native Americans in the events of the last days is noted by several Book of Mormon prophets.” (Brigham Young University wiki on Native Americans).

Evangelicals might not have caught how Beck slid Mormon theology into his 8/28 speech, but there it is, hidden right under their noses. Why did that sneak by? Perhaps it is because evangelicals have already bought into the myth that the Pilgrims were God’s chosen people to come to America to make this a Christian nation, so they missed the Native American reference.

But the myth that the Native Americans were a tribe of Israel, thus the “Chosen People” of America is just as full of holes as the Pilgrims being God’s Chosen People and that America is some kind of “Promised Land.”

Certainly the Pilgrims saw themselves this way. Pop-historians like David Barton like to quote from the Pilgrims about how they were seeking to create a Christ-centered theocracy in the new world, escaping from the evil bondage of the religious persecution of Europe. Beck is one of these pop-historians, stating that this is proof that God has ordained American as His nation.

But the honest historical and theological question is this: Were the Pilgrims right?

Oh wow. I am simply stunned at how some "discerning" Christian leaders have allowed themselves to be hoodwinked into following Beck.

It could be worse, however. These same leaders could have knowingly and willingly compromised biblical truth and integrity for political power.

Well, I'm a bit of a Beck fan, and this drivel that somebody posted about Beck being in it for the money is pure nonsense, but you're sure right, Bob; this is scary stuff, and it really is bothersome that David Barton wrote an extremely naive piece cozying up to Beck AND his beliefs.

Blogged about it here, if you haven't read the piece:

You may be correct, Bob. If so, the truth will come out. For me the issue is not that Beck is a Mormon or even that he is a Christian. I don't care if he's Roman Catholic, Russian Orthodox, or Jewish. (I believe he may be a sinner who has repented and embraced Jesus as his only hope for salvation but don't know). The secular progressives have sought to marginalize those of faith (as if their presuppositions weren't religious)for almost a 100 years and we faithful bought into the Sacred/Secular dichotomy nonsense and let them marginalize us. Instead of being in the gates of the cities ruling as we were called to do, we have been hiding out the baggage compartment. Shame on us. Beck is pushing back and preaching that religion isn't just for Sundays but for every day of the week. It is biblical notions/concepts/ideas(a biblical worldview)that is/were/are the foundation of this great nation. Religious ideas/notions/beliefs are at the heart of any society/culture; it must be so. If we have to have someone's laws, ideas, beliefs, why not have God's? If Beck can give voice to the truth that life is religious by nature, that you can't have life without someone's religious notions, that there is no better explanation for reality (who am I, where am I, what's the problem and what's the solution) than that found in the Holy Bible, I say, preach it. May God use Mr. Beck to awaken do nothing evangelicals into embracing their responsibility to rule over His creation for His glory and honor.

Dennis, are you saying the "end justifies the means"?

Would you feel the same if Beck was Muslim, or Hindu, etc. -- as long as he brings the word of God? I'll bet not.

Misguided/misleading religious messages are the last thing we need, and it's exactly what terrorists use when attacking innocent people in tall buildings, for example.