In my last post, I asked, “What would it look like if a new generation of Christians took seriously the task of being subversive prophetic voices in their culture?” 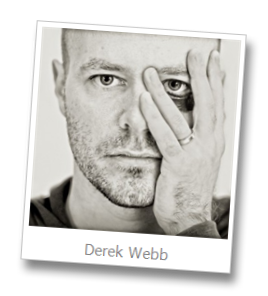 Derek Webb takes a prophetic stand against the homophobia that exists in the evangelical subculture with “What Matters More.”

Webb’s label, INO Records, found the song too scandalous because Webb uses the word “shit” on it, so after much wrangling, Webb and the label agreed to not include it on INO’s release of the album Stockholm Syndrome while Webb could include it on his personal website’s version of the album.
The song is a subversive prophetic voice to those of us who act self-righteous with our words against homosexuality, showing that we have our priorities out of whack about the things that really matter.


If I can tell what's in your heart
By what comes out of your mouth,
Then it sure looks to me like
Being straight is all it's about.

It looks like being hated
For all the wrong things,
Like chasing the wind
While the pendulum swings.

'Cause we can talk and debate
Till we're blue in the face
About the language and tradition
That He's coming to save.

Meanwhile we sit
Just like we don't give a shit
About fifty thousand people
Who are dying today.

Of course, Derek Webb is not the first Christian ever to write something using a shocking word for excrement as a device to get our attention. The Apostle Paul, writing about all his past religious credentials, wrote to the Philippians,


“I count everything as loss because of the surpassing worth of knowing Christ Jesus my Lord. For his sake I have suffered the loss of all things and count them as σκύβαλον (skubalon - dung, human excrement, “shit”) in order that I may gain Christ and be found in him” (Philippians 3:8-9).

Sometimes it takes a little rebellious language to get the attention of those who are “religious” while Christ and his Kingdom demand us to change our ways.
Posted by Bob Robinson at 9/29/2011