Tragedy and the Will of God 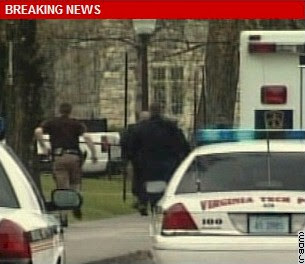 Again, something horrific has happened, and Christians will be seeking comfort in the God who is sovereign. They’ll say, “God is in control.”

When asked by honest, inquiring people why an “in control” God would do such a terrible thing, they’ll back off their statement and soften it by saying, “God allowed it.” Pressed to explain this further, they’ll say something like, “God’s purposes are greater than our purposes; his ways are mysterious. We don’t know why God allowed it to happen, but we know that God is both good and omnipotent, so we know he has good purposes for this.”

To which most level-headed people would react by scrunching their brows and allowing their jaws to drop.

How is it good, in any way we can imaginably define, that at least twenty college students are killed by a gunman? How is this anything but what the president of the university, Charles Steger called it, “a tragedy of monumental proportions”? Any other assessment of this awful news is ludicrous.

I just talked this morning with a friend who has long-abandoned the evangelical faith of her upbringing. She has just learned that her 14-year-old son has been diagnosed with a tumor in his face the size of a man’s fist. This week they seek to get more advice from medical specialists to surgically remove the growth. She told me that many of her evangelical family and friends have gone into a strange mode of quoting Bible verses to her and telling her that God’s in control and that he has a purpose for this suffering. It is shocking to her. She looked me in the eye and said that all she really needs is for someone to be Christ to her – to come alongside her and suffer with her. I apologized to her on behalf of these Christians, telling her that we say we follow the “Suffering Servant,” but we are often not very good suffering servants ourselves.

As I drove home, I thought about this Jesus Christ we follow. Jesus came and lived our pathetic, frustrating life. He talked about righting the injustices in the world. He said that the world was not the way it is supposed to be, explaining that sin is wreaking havoc on God’s creation, especially us humans. And then he said that HE was the One that could move the world back toward God’s intentions. He spoke of the redemption of all things, the new creation, the making things right again. And then this Jesus did something completely unexpected – he went to the incredible extreme by dying on the cross. He took on the worst the world can deal us, unjustly suffering at the hands of the empire.

Why did he do that? Because the world was not the way it was supposed to be. Because God’s will is often times thwarted by evil people and evil systems and evil institutions.

The cross reveals that God’s omnipotence is displayed in self-sacrificial love.

The cross reveals that the world is an incredible mess – how else can we explain the execution of the only absolutely innocent man?

The cross reveals that classroom mass murders and 9/11 tragedies and heart aneurysms and tumors in kid’s faces are all thwarting God’s will. God does not want college students bleeding to death. God does not want a 14-year old to have his face carved away because a tumor is taking over his skull.

God reveals that he is also willing to suffer. When I seek comfort in times like these, I picture Jesus up above me on a cross, with nails in his hands and feet. And he looks down on me and says, without words but just with his loving eyes, “This is my way of dealing with sin and injustice and pain and suffering. I submit to it myself.”

And then I hear him say, “The way to follow me is to do the same. Don’t give pat answers to those who suffer. Don’t seek to overcome evil with power…

“Conquer evil and win the hearts of people who suffer by your self-sacrificial love. Then, and only then, will you be following me.”
Posted by Bob Robinson at 4/16/2007

I cannot comment on how these friends shared scripture with your friend. There is certainly a wise way to do so and a way lacking wisdom.

That said, I would never hesitate to share scripture and the gospel with anyone suffering. It is the only hope and comfort we have - there's nothing "pat" about it. The fact that your friend rejected that isn't a repudiation of the sufficiency of scripture at the time of our greatest need. If it cannot speak to us at this point, it is impotent. But in fact, it does - when my wife had cancer six years ago, the words of God was the only comfort when we faced dark days.

There's a difference here: When I nearly died last year, my wife stood by my hospital bed and read to me Scripture for hours and hours. It was a huge comfort for her, and as I came out of my coma, it was my comfort as well.

That is different from what I'm talking about here. It was not a comfort for someone to say, "This must be in God's plan" and quote Romans 8:28 to me. It was not a comfort for Christians to theologize about it ("God allows suffering," "God must have a lesson to teach you," "God's will in this will be revealed for you..."). Instead of dealing squarely with suffering, Christians often keep it at arms-length by simplifying it. That kind of shallow Christian pablum (effortless pat answers) is the last thing we need in our time of suffering.

We rather need someone to be the very incarnation of Christ in our midst - someone who is willing to suffer along with us.

What I do hope to do is love the person who can't hear it. I'm not going to stand on my hill, look down and say, if it hurts, that's your fault. I'm going to stand with them and say things like "I don't know." "I'm sorry." I'm going to be the word they are unable to hear.

At least I hope. And I think that's what we need to do in reaction to the tragedy in VA Tech. When people start asking Where is God in this, we need to just be Christ. Eventually, when things have calmed down, maybe they'll see that God was in us with them.

I think the best time for building a theology of evil and suffering within the sphere of God's sovereignty is NOT when you are in the midst of the crisis!

And that's probably not the time to be sharing a theology of suffering, either. [Unless they are asking.]

I agree with Bob. When the suffering is fresh and the pain is excruciating, there is nothing like a flesh and blood person who is present.

This is the only thing that Job's comforters got right (Job 2:13).

P.S. On the other hand, in my experience, there is nothing like a robust theology of suffering within the sphere of the sovereignty of God for getting a believer through the pain. When my wife and I lost 6 month gestating daughter to stillbirth, there wasn't anything more stabilizing for us than Romans 8. But I would have hated for that to be the first I'd been introduced to it!

I think the two most important issues in dealing with another's tragedy/suffering are honesty and believing in the body of the church enough to use it to help others.

If you have not dealt personally with much suffering, great, but be honest about it. I think very well intended folk try to deal with suffering when it really is not for them to do so. Refer them to someone who has been through enough suffering so that they can comfort others. It is a great Biblical principle that works. It also allows those who have suffered an opportunity to allow God to use their experiences and it will encourage them as well, IMHO. We don't have to be all for everyone. Just know your resources within the community of Faith you are in.