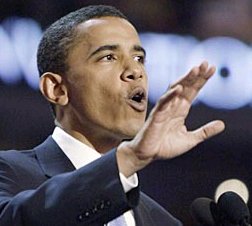 WASHINGTON -- Sen. Barack Obama chastised fellow Democrats on Wednesday for failing to "acknowledge the power of faith in the lives of the American people," and said the party must compete for the support of evangelicals and other churchgoing Americans.

"Not every mention of God in public is a breach to the wall of separation. Context matters," the Illinois Democrat said in remarks to a conference of Call to Renewal, a faith-based movement to overcome poverty.

"It is doubtful that children reciting the Pledge of Allegiance feel oppressed or brainwashed as a consequence of muttering the phrase 'under God,'" he said. "Having voluntary student prayer groups using school property to meet should not be a threat, any more than its use by the High School Republicans should threaten Democrats."

Obama, the only black in the Senate, drew national notice even before arriving in Congress last year, and has occasionally used his visibility to scold members of his own party. Widely sought as a fundraiser for other Democrats, Obama responded with a noncommittal laugh this spring when asked whether he wants a spot on the national ticket in 2008.

His speech included unusually personal references to religion, the type of remarks that usually come more readily from Republicans than Democrats.

"Kneeling beneath that cross on the South Side of Chicago, I felt I heard God's spirit beckoning me," he said of his walk down the aisle of the Trinity United Church of Christ. "I submitted myself to his will and dedicated myself to discovering his truth."

Obama said millions of Christians, Muslims and Jews have traveled similar religious paths, and that is why "we cannot abandon the field of religious discourse. ... In other words, if we don't reach out to evangelical Christians and other religious Americans and tell them what we stand for, Jerry Falwells and Pat Robertsons will continue to hold sway."

Obama coupled his advice with a warning. "Nothing is more transparent than inauthentic expressions of faith: the politician who shows up at a black church around election time and claps _ off rhythm _ to the gospel choir."

At the same time, he said, "Secularists are wrong when they ask believers to leave their religion at the door before entering the public square."

As a result, "I think we make a mistake when we fail to acknowledge the power of faith in the lives of the American people and join a serious debate about how to reconcile faith with our modern, pluralistic democracy."

Obama mentioned leaders of the religious right briefly, saying they must "accept some ground rules for collaboration" and recognize the importance of the separation of church and state.

To hear the podcast of the speech to Sojourners’ and Call to Renewal's Pentecost 2006 Conference, go to Obama’s website.

Interesting, Bob. So far, overall, I've liked what I've heard from Obama. The Dems can't be taken seriously by me (and I'm not a registered Republican) until they start thinking and acting authentically along the lines of what he is saying.
Thanks for sharing this.

I do consider separate candidates of Democrats and separate issues and debates. My refusal to take them seriously is a general statement, and has alot of reference to what I see as a kind of secularistic humanism in their party platform (what Obama, to me, is getting at here).

Ted,
In my opinion, the Republicans appeal to evangelical Christians is more rhetoric and manipulation than honest policy. It's interesting that they have controlled the Congress and the White House for all these years and yet have not really done a whole lot on the issues that they like to trumpet when they seek the Christian vote.

The Democrats simply miss the opportunity when it comes to religious people's concerns. They have not properly explained their platform ideas in moral and/or religious terms, mostly because they fear retaliation from the parts of their party that are wary of religion because of the Religious Right's stands against abortion and homosexuality.

Obama is one of the new generation of Democrats, who will be able to ground moral causes to religious foundations.

Bob,
It's good to hear of Obama, and I hope for more like him among the Democrats, to come.

I strongly agree with you about your comment here about the Republicans.

...also I've been impressed everytime I've seen Obama interviewed. He seems more than a political opportunist. One genuinely engaging in ways that can connect and promote some good and unifying policies.

Hear, hear! I wouldn't consider voting for Obama, but he's speaking the truth on this one; good for him.