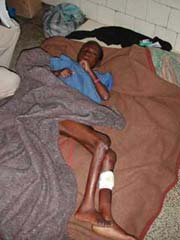 World Relief: An estimated 40.3 million people worldwide are infected with the AIDS virus, up from 37.5 million in 2003, the latest UN AIDS Epidemic Update states.

Bono's American Prayer: The world's biggest rock star tours the heartland, talking more openly about his faith as he recruits Christians in the fight against AIDS in Africa.

DATA: Bringing people and organizations from all around the world together to stop the spread of AIDS and extreme poverty in Africa.

Engage HIV/AIDS: HIV/AIDS is causing suffering and despair throughout the world. We can simply change the channel and ignore the reality of the situation, or we can do something about it.

Purpose Driven in Rwanda: Rick Warren says when his wife finally told him God was calling her to the front lines of ministry against HIV/AIDS in Africa, he responded, saying, "That's great, honey. I'm going to support you. It's not my vision." "But nothing is as strong as pillow talk," he added. "God used my wife to grab my heart."

here's an interesting snippet i found in hm magazine. bono met with pres.g.w.bush over lunch to discuss increased funding for the fight against aids,tb,and malaria,as well as debt cancellation for developing countries and efforts to make global trade fair. when asked by a reporter for rolling stone magazine, if he was nervous when meeting with big-time world leaders, he was quoted as saying that "they should be afraid because they will be held accountable for what happened on their watch.i'm representing the poorest and the most vulnerable people.on a spiritual level,i have that with me.i'm throwing a punch, and the fist belongs to people who can't be in the room,whose rage,whose anger,whose hurt i represent.the moral force is way beyond mine, it's an argument that has much more weight than i have." this is a bold statement and this is the time to be bold.

Good words from a cutting-edge prophet and rebel!

Thanks for the overwhelming reminder of this tragedy.
Blessings.