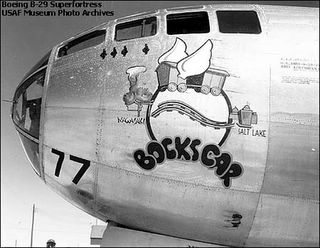 This last Saturday, the 60th anniversary of the first atomic bomb drop on Japan, I was at The National Museum of the US Air Force in Dayton, Ohio.

I stood under the legendary aircraft, the Bockscar, the B29 that dropped the bomb on Nagasaki 60 years ago today (August 9, 1945, 11:02 AM, Nagasaki time). As I stood under its belly, reaching up to touch the underside of this massive airplane, I tried to imagine flying over the ocean and then over the Japanese homes on the way to Nagasaki. I imagined the bomb, “Fat Boy,” unloading from the bomb bay and dropping behind me.

The Air Force museum does not tell of the fatalities, only that the bomb ended a war that promised to continue to be very bloody and cost many, many lives. Japan surrendered three days after the bombing, ending World War II.

An estimated 65,000 men, women, and children were killed and tens of thousands injured at Nagasaki to add to the 130,000 that died from the nuclear attack on Hiroshima.

I stood there for a while, in my world of imagination, until I realized that I was in the way of some people trying to take a family picture in front of the plane. The Japanese family lined up and smiled…the camera flashed, and the family said something to each other in Japanese. I watched in stunned silence. It seemed almost surreal.
Posted by Bob Robinson at 8/09/2005

Check out Byron Borger's recommendations on books about PEACE in light of the Hiroshima and Nagasaki.
Link:
Hearts & Minds