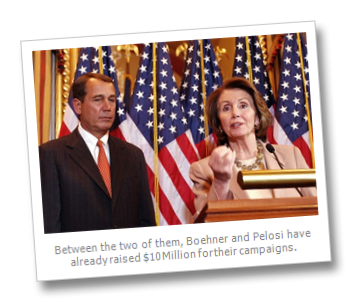 So I was walking out of Denny’s yesterday morning when I glanced over at the front page of the USA Today. There was this article, titled, “Boehner as speaker of the House? Big donors think so.” The opening paragraphs stopped me in my tracks.

“Powerful interests are banking on Republican John Boehner to be the next speaker of the House, fundraising reports show.

The Ohio lawmaker has collected nearly $7.1 million for his campaign and leadership committees — more than double the $2.9 million that current Speaker Nancy Pelosi has received in similar fundraising, according to data compiled by the non-partisan Center for Responsive Politics. Another $2 million has flowed into "Boehner for Speaker," a fundraising committee that shares contributions with the group working to elect more Republicans.

The industries giving the most to Boehner: insurance companies, drug manufacturers and Wall Street firms…”

I stood there shocked as I did the math. Between the two congressional leaders, they have raised ten million dollars.

And this in light of the recent Census Bureau report which stated, “The number of people in poverty in 2009 (43.6 million) is the largest number in the 51 years for which poverty estimates have been published.”

It doesn't matter if you’re a Republican or a Democrat, if you are a Christian, I think you’ll agree that our political system is extremely broken, starting with the way we fund campaigns.

I recently heard that a local private high school raised $8 million dollars with student donations. This is just rich parents obviously but the more I thought about it the more disgusted I was. The local public schools are laying off teachers and have nearly 30 kids per class.