2007 was an excellent year in the vanguard. Thank you to all who read this blog and come back for more every week. 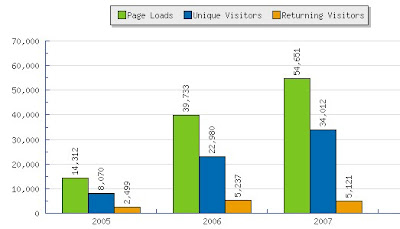 #8: Is Rob Bell a Godless Man, Condemned by God?
John MacArthur's book, The Truth War, makes the case that Rob Bell, the popular pastor, speaker, author, and creator of the Nooma videos, is apostate. One of a series I did reviewing MacArthur's book.

#7: Dispensationalism vs. the Rest of Evangelicalism on the Israeli/Palestinian Controversy
John Hagee, the leader of Christians United for Israel does not represent the majority view of evangelical Christians. Christian Zionism gets the Bible wrong and does harm in the lives of those in Palestine/Israel.

#6: Dobson, et. al. Versus the Rest of Evangelicalism
Another post about how high-profile evangelical leaders do not represent us very well. James Dobson, resident bully of the Evangelical Right, tried to persuade the National Association of Evangelicals to fire their Vice Preident for Governmental Affairs, Richard Cizik, because he dares to expand the set of political issues that we should care about.

#5: Conservatives and the Minimum Wage
A very helpful dialog (be sure to read the comments) exploring what the Christian stand should be on the issue of the Minimum Wage.

#4: Josh McDowell – “I’m Sick of McLaren and Bell Putting Me in the Modernist Camp.”
This made quite a splash around the blog world. McDowell, author of Evidence that Demands a Verdict and More Than a Carpenter, two standard popular books of modernist Christian apologetics, critiques the tenants of modernism and pleads for a more relational apologetic.

#3: How to have an Appreciative Inquiry evangelistic conversation
Part of a series on how to re-imagine our evangelism methodology based on our belief in the Imago Dei and the potential in all human beings. It was controversial because it did not begin with our depravity and it did not center on Penal Substitution. Thanks to the many blogs out there that re-posted this and expanded the conversation.

What do you use to track unique vs returning visitors? Can you reccomend a program?

Nick,
I use statcounter.

I sent you an email last week. did you get it?