Benny Hinn - What a Great Guy 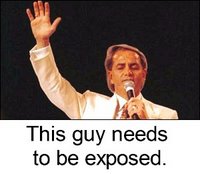 Bob Hyatt, over at Bob.Blog, has brought to our attention the NBC documentary that exposed Benny Hinn's ministry. To see the You Tube videos of the documentary, go over and visit Bob. He also found a video with excerpts from the 1972 Academy Award winning documentary (by and about Marjoe Gortner) that shows what happens behind-the-scenes in the lucrative business of faith-healing.

Hank Hannegraff (who, by the way, I disagree with as much as I agree with) correctly writes,

"A well-known charismatic leader participated in a Benny Hinn television extravaganza. Hinn was "slaying" his subjects "in the Spirit" when suddenly he moved in this man’s direction. Hinn stretched forth his hand and shouted, "In the mighty name of Jesus!" Immediately the man fell backward into the hands of a designated "catcher."

Later the man confessed that his experience had nothing to do with the power of God. Peer pressure had caused him to fake his fall. Revealingly, when he asked a cameraman to edit out the faked fall, the cameraman merely chuckled and told him it was common for people to fake it.

Like Hinn, leaders of the Counterfeit Revival use peer pressure to conform their prospects to predictable patterns. They urge them to follow the crowd rather than considering the consequences.

Like hypnotists and Hindu gurus, these "healers" use the power of suggestion to create placebos for psychosomatic symptoms and sickness. In truth, however, there is nothing supernatural about this kind of healing. Hinn and Howard-Browne can "heal" asthma, allergies, and arthritis, but then, so can mesmerists and medicine men. The difference between the "magic" of mental manipulations and genuine miracles is dramatic.

The satirical magazine, The Wittenburg Door offers a 6-hour set of DVDs called The Many Faces of Benny Hinn. The perfect Christmas present for someone who wants to learn about one of today's biggest religious hoaxes. Follow the link where they offer a hilarious-yet-sad video clip from their video.

I'm not sure peer pressure is necessarily bad.

It also isn't a bad thing to be healed by a placebo as, unlike real medication, placebos are safe and the healing is genuine.

I'm kind of in a transition, on this topic. I would prefer if Hinn didn't make so much money...

Without giving it much thought, I used to think that people who were goofy enough to believe in people like Hinn, "deserved" what they got--nothing.

You can imagine my dumbfounded surprise when a good friend announced to me he was planning (and did) attend one of Hinn's crusades. My friend went blind from a brain tumor his last semester in med school right as he had become set to begin interning as a surgeon. He went on to get his PhD in psychology after going blind. My friend was even more cynical than me (believe it or not), but obviously his desperation was so great he was willing to even try a trip to one of Hinn's circus crusades.

There was nothing stupid about my friend. For Hinn to be able to prey upon someone as cynical/desperate as my friend, really opened my eyes to the amount of power folks like Hinn truly have.

My friend died 18 months ago from tumors/cancer...

Are there hot enough spaces in Hell for Hinn and his ilk?

Of course you're right about Hinn, Bob, but I bet you agree with Hanegraaff 98% of the time with relation to the subjects that matter...think about it.

Yes, I agree with Hannegraff on many things that "matter," but the main thing that matters is integrity.

I was apprehensive in quoting from him about Hinn because I think Hinn's greatest sin has to do with financial manipulation of people and an intoxication with his own power.

In 2003, Christianity Today reported that CRI (Hanegraaff's ministry) was under investigation by the Evangelical Council for Financial Accountability. One line from the article stands out for me:

"One item she (Jen Hubbard) was particularly concerned about was CRI's paying $66,000 in July 2002 for a blue Lexus sc, purchased for Hanegraaff's use. That same year former employees said a lull in giving resulted in layoffs at the $9.3 million ministry."

This is not the first bit of controversy that Hanegraaff has had since taking over CRI. For a history of those controversies, see the Wikipedia article on Hanegraaff.

So, in my pointing out how Hinn lacks integrity, I quote somebody else who also may have succumbed to the temptation of money and power. This is why I threw that disclaimer in!

Thanks, Miche, for that enlightening story. The trouble with Word-Faith ministries like Hinn's is this: They do not take the Fall seriously enough. Certainly we can agree with Hinn or Kenneth Copeland or Paul Crouch that God wants to heal us in our present situation. But they seem to think that if we muster up enough faith, then God jump through our hoops and will bring eternal blessing to us now.

This is not the promise. The promise is that in this "Already/Not Yet" when the Kingdom has been inaugerated but not yet consummated, we will experience in part the blessings of our eschatological future blessings, but that until Christ returns, people will still go blind from cancer. This transience, this groaning of all creation, is what NT Wright calls a signpost toward the future goals that God has for us.

I much prefer lurking your blog and learning from those more intelligent and mature than myself, but...

I agree that the problem may be that the Fall is not taken seriously enough, but I would point that challenge to the American church, more than Hinn and his ilk. When I hear James Dobson or Jim Wallis trying to speak into our culture about how best to live, am I the only one who considers the hypocrisy of their silence toward the Hinns of this world? Who is the American church to think they can combat the myriad of issues they do in our culture and allow "white washed tombstones" prey on their very own within the community of thier own faith?

I know I am daydreaming to want the American church to actually clean up its own house, or take its planks out of its own eyes before they attempt to have credibility within our culture/world.

Hinn's extravagances may be relatively obvious and blatant, but are all these suburban churches who are building thier multi-multi-million "campuses" much different when you consider world poverty? The Word-Faith theological differences may truly exist, but the commonality of materialism of the western church seems to blind any solutions being achieved that would have any significance in genuinely expressing faith to our culture.

Wonder what the outcome of those Hanegraaf allegations has been? Yeah, I've been aware of those controversies.

I think it's a little strong to call Dobson and Wallis hypocrites on this one; first, are we sure that they haven't spoken up on the Hinns of this world? Second, is it possible that some don't speak up because they assume (maybe wrongly, granted) that it's so obvious that Benny Hinn, et al, are quacks, that it doesn't need to be said? Just thinking...but I'm pretty sure I know where both Dobson and Wallis would stand on this nutcake.

Thanks for your thoughts. From reading your blog you seem astute enough to realize that Hinn is what he is; Dobson and Wallis strike me likewise. The hypocrisy seems that both of these gentlemen wish to influence, to some degree, a culture that denies our faith, while not addressing those speaking for our faith as outlandishly as Hinn does. If we do not take care of "our own," it strikes me as hypocritical to say we have something to offer our culture. Even if Dobson and Wallis have spoken out about Hinn at some time, I think I am on pretty solid footing to say they have not taken Hinn on as much as gay marriage or the poor and needy.
Jesus seemed to have a whole lot more to say to the "Hinns" of this world than he did to the Caesars, and cultural mover and shakers.

In my scarce moments away from being only cynical about the western Church, I am amazed when I reflect how much we do not see our own need to repent from our hypocrisies. I include myself right in there as well. I keep hoping for leaders to help show us/me how to live our/my faith better. Letting the Hinns get away with what they do does not infuse me with much hope at present. I do not think “hypocrisy” too strong a term, unfortunately.

Thanks again for the thoughts…

WARNING: BE careful what you speak about men and women of God. Whether you think they of God or not i suggest u keep ur thoughts to yourself. GOD HIMSELF SAYS in The bible: Do not touch My anointed in thought, word of deed. THat is a warning from God, because GOD BEingGOD knew b4 hand that people would persecute His own. When you persecute born-again believers you persecuteGOD. And yes, HEALING IS BIBLICAL. IN THE WORLD WE LIVE IN TODAY DONT YOU THINK OR HOPE THAT THERE IS A WAY OF ESCAPE. DONT YOU WANT A WAY OUT FROM SICKNESS, DEPRESSION, OPPRESION, ADDICTION, etc????????
GOD LOVES YOU SO MUCH THAT HE SACRIFICED HIS ONLY SON SO THAT HE MAY BEAR THE SIN OF MAN UPON HIMSELF, SO THEY MAY BE FORGIVEN OF THEIR SINS AND BE RESTORED TO A RELATIONSHIP WITH GOD...PLEASE NOTE: NOT RELIGION.BUT RELATIONSHIP. GOD WANTS THE BEST FOR YOU? HOW WILL YOU BELIEVE GOD IS ALIVE AND FULL OF POWER ??? HOW WILL YOU BELIEVE WITHOUT A SIGN, WONDER OR MIRACLE??? THE SIGNS THAT A BELIEVER HAS (PROVIDED THEY WALKING IN THEIR GOD-GIVEN AUTHORITY) IS IN MARK 16:17-18. THE BIBLE SAYS: "And these attesting signs will accompany those who believe: in my names they will cast out demons (if u not God possessed u demon possessed),you will lay hands on the sick and they will recover". But you see if man could lay hands on every sick person and they healed then it where will GOD get the Glory??? Its the work of God through man..GOD Needs vessels to allow His Power to flow through. ACTS 1:8 But you will receive Power when the HOly Spirit has come upon you, and you shall be my witnesses...
Acts 10:38 How GOD Anointed Jesus Christ of Nazareth with the Holy Ghost and Power Who went about doing good and healing for GOD was with Him
Matt 28: 18 Now you go (GOD SPEAKING TO US) and make disciples of all nations.I am with you always.
Ephesian 2:10 For we are His workmanship recreated (born-anew) for good works...
WHOSE REPORT DO YOU BELIEVE???????????
Rather man be a liar and GOD BE TRUE! If u want to give your life to Christ all you have to do is believe...and pray the basic prayer of salvation (BUT YOU HAVE TO BELIEVE IN YOUR HEART).

In other words, since Hinn claims to have divine healing power and prophetic extra-biblical revelations directly from God, he must be "God's Anointed," above any call to accountability for his financial manipulations or his heretical teachings.

"Rather man be a liar and GOD BE TRUE!" Hinn is a liar.

I am a person who offers loans to the national. With capital that will be used to grant loans between short-term and long-term individuals ranging from $5, 000 to $500,000,000 all the serious people being in the real needs, the interest rate is 3% over the entire repayment period. I make loans Financial in all areas. I am available to satisfy my customers within 24hours, see 1 day after your application send replies to the following E-mail address: standardonlineinvestment@gmail.com
Thanks and look forward to your prompt reply.
Regards,
Muqse